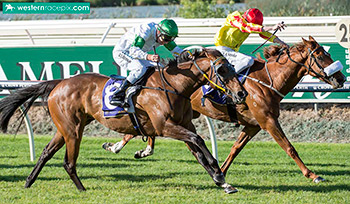 With the distance unknown beyond 1200 metres, Jason Brown slotted the horse ideally in a one-out-one-back position, taking the pressure off her to win powerfully.

“It was an awkward barrier, but if we knew before the race that we’d land one-one, then I’d say we would be hard to beat” said trainer Jim Taylor.

Race favourite Elite Belle failed to replicate her brilliant win over Barakey last start, finishing fourth off the back of a slow tempo. On speed proved the place to be, with leader Fuchsia Bandana and Plantinum Rocker holding out to finish second and third respectively.