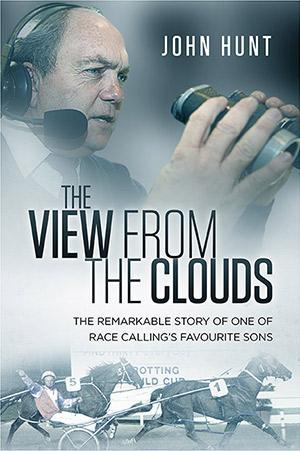 In thirty-two years of race broadcasting, John Hunt witnessed some of the greatest stories of the track, particularly from the world of harness racing. The champions, the glory, the tragedy, the drama, the passion and the humour.

In the upcoming biography, The View From The Clouds (Vivid Publishing, $34.95), John Hunt peels back the layers of horse racing, revealing the core truths beneath its skin.

He recalls the deeds of some of the mightiest pacers that ever lived in this riveting tribute to the wonderful world of horses and the people who would guide them. It is also the story of the unique career that evolved in the broadcast box above them.

Beautifully packaged with colour photo inserts, The View From The Clouds provides a fascinating insight into the heart of racing from one of Australia’s most renowned broadcasters.

Take a look special feature video by Steve Butler on John Hunt, courtesy of The West.

In The View From The Clouds, the pervading theme throughout is of one man’s love for all things horses, given vent through the arcane pursuit of race broadcasting.

Gifted a microphone and a pair of field glasses at an early age, John Hunt’s metamorphosis through myriad adventures from aspiring tennis pro to national media renown is a compelling tale of a man with an innate sense of timing, on a journey through an industry in a constant state of development.  His career, spanning thirty-two years, was fuelled by his affection for both horses and horse people and re-invigorated daily by the public’s passionate response to that affection.

In his role, Hunt would relate and bring to life the deeds of some of the nation’s greatest equines, particularly in the world of harness racing.  But it is the journey he takes us on through the labyrinthine corridors behind the scenes, that makes this tale unique.

The story focuses on a select group of legendary champions, the icons of harness racing, that passed beneath the broadcast box at Gloucester Park in Perth from the early 1970s to the contemporary era.  With them came triumph and tragedy, drama and pathos, passion, tears, fun, romance and humour – and there was plenty of that.

The first was Mount Eden, a freakish rogue who re-defined the word champion in Australian folklore, breaking all the rules to become arguably the greatest and certainly the most improbable champion in history.  There has never been another like him.

He was followed a few years later by Pure Steel, the fearsome stallion who remains today the benchmark for standardbred bravery and elegance of gait, and with whom John Hunt would form a friendship that would affect his evolution as a caller.  He would also make a friend and mentor of the horse’s famous owner and fall head-over-heels in love with that man’s daughter.

Then there was Satinover, Pure Steel’s magnificent and aggressive black rival in the Match Race Of The Century; seemingly on a firm course to greatness until that fateful and unforgettable night.

At the same time and on a parallel rise to fame with Satinover, was a youthful phenomenon called San Simeon; destined to be responsible for the greatest winning sequence in thoroughbred or standardbred history – twenty-nine – and whose trainer-driver left nothing hidden in exhibiting his heart-rending bond with this amazing animal.

No sooner was San Simeon gone than Preux Chevalier appeared on the scene, devouring all opposition, often by massive margins and at speeds that had never before been seen.  Then, just as an aura of invincibility began to cloak him, an unheralded tyro at top level stunned the pacing world by humbling the champion. His name was Village Kid and the decade-long legend that he would pen is unlikely to be matched in the next thousand years, nor the adoration from the masses, which both he and his jovial and whimsical trainer enjoyed.  Nor is there likely to be a similar swansong performance, to that of this noblest of all gentlemen steeds.  It was a night when the impossible was made real.

As his light waned, a drama was played out in Perth that would rival Shakespeare for its glorious despair.  Westburn Grant and Franco Ice, visitors both to western shores, played their epic roles with alacrity in a race for the ages, to the backdrop of an industry in shock.

Soon after, Jack Morris was the name on everyone’s lips.  His meteoric ascendancy to national champion mirrored that of his trainer-reinsman, an Irish-Australian with the laugh and wit of a leprechaun and an outlandish bent for big statements that greatly magnified his time in the sun. A time that was ended by cancer at the age of thirty-nine, before his mighty horse had even finished racing.

With the new millennium came two new champions; Baltic Eagle – who would change stables mid-career and conquer Australasia  – and The Falcon Strike, the final champion of John Hunt’s career and the one who would redirect his life.  The aging caller would later marry one of the pacer’s principle owners.

In all these tales, the attachments and friendships that Hunt formed through his profession, would provide him with an unmatched provenance from which to comment, and later, from which to write.  And he is, first and foremost, a storyteller.  It has defined him and enabled him to peel back the layers of horse racing and reveal the core truths beneath its skin.  The most important of these being the career-guiding belief and conviction that for all the money, colourful characters and plain skullduggery that accompanies an industry whose life blood is pumped by gambling, the driving motivation that subtly lures its thousands of fans is the absolute innocence, nobility and aristocracy of the horse.

As a commentator, the broadcast box window allowed John Hunt a unique point of view.  It was a view no-one else could share.

The view from the clouds.